We are excited to have hosted the European Film Festival, which is in Ghana for the first time!

Over 300 students and staff from Ridge School-Kumasi, Humpty Dumpty and the Adjemesu joined the ICS Community to watch for free, short films and documentaries such as Nirvana, Azumah, Believe in Ghana, Rising Star, and the Fisherman among others.

Azumah, a film that chronicled the journey of Africa’s most successful boxer to his first international fight was a big hit with students.

According to some of the students, they took great inspiration from the story of Azumah persevering in spite of losing in his first attempt at an international title, to become Africa’s most successful boxer.

The European Film Festival Ghana is Ghana’s first ever film festival designed to showcase the latest European feature films, serving as a platform for cultural exchange, inspiration and partnership. 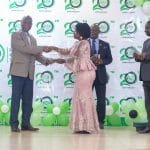 World Teachers Day: How Teachers of ICS Are Leading in CrisisUncategorized